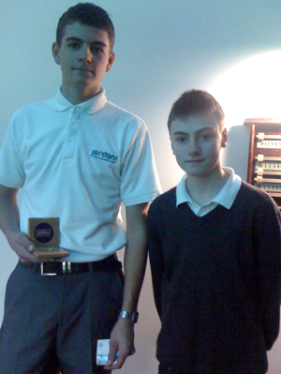 The Under 16s 'Summers Cup' was won by Luke Bowry from Sheerness playing out of Jordan's Club beating Jordan Grimshaw 3-0 in the final. Luke played supremely well all day and felt a little under pressure as this was his only chance to win this event as he turns 16 in July. Jordan showed some form in the round robin stages winning his group which included last year's winner, Arkin Chadarli. It was great to see a few new faces this time round and special mention should go to Callum Haughian who shows great potential at only 10 years old.

This year we decided to run the free-to-enter-event on a Saturday in an effort to boost the entries. We had 8 runners this year which is on par with previous years so we will probably return to it being on a Sunday next season. The Committee would like to apologise to anyone who couldn't make it this year. 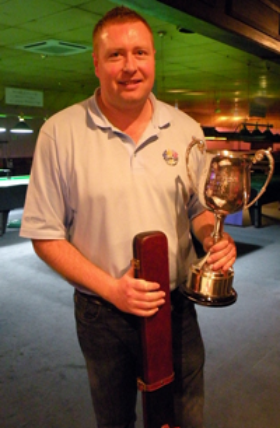 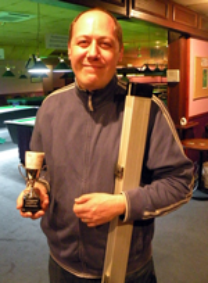 WHAT A MAGNIFICENT DAY!
We made our target of 64 players! Only just mind you, as John Yuen and Alan Hua turned up in the nick of time after going to Rainham in Essex before realising they should have been in Kent, but they made the entry list up to the perfect number! Opening the competition up to players from outside of the County certainly made the difference as a fair percentage came outside of Kent and it was nice to welcome so many new faces.

But it was the men of Kent who took all the honours with second time winner Steve Crowley claiming the title in a compelling final against Steve Wagon that didn't finish until 12.20am! I'd like to say it was as exciting as the '85 final of Davis v Taylor but the truth was Wagon didn't have the run of the balls and Crowley remained rock solid dishing up 3-0 quite comfortably. However it was Mr Wagon who had made the earlier headlines taking out two professionals, Gerard Greene and Barry Hawkins in previous rounds. Another fellow professional, Stuart Bingham claimed the highest break of the day with a 111. Special commendation should also go to Sean O'Sullivan and James Loft who played superbly to reach the semi-finals.

After narrowly losing out to Katie Henrick in the Cup, Charlie Walters went on to win the Plate competition. He played wonderfully throughout with a couple of 90+ breaks and eventually triumphed over Steve Whybrow in the final to take the prize.

Let's hope the success of this event is a marker for the future and maybe our other comps will swell in entrants. A big thank you to all those who attended, we hope you enjoyed the day and look forward to seeing you again next year, just make sure you get your entry in earlier to guarantee your name in the draw! Special thanks must go to Les, Maureen, Jordan and Barbara for their tremendous support and efforts on the day looking after us. 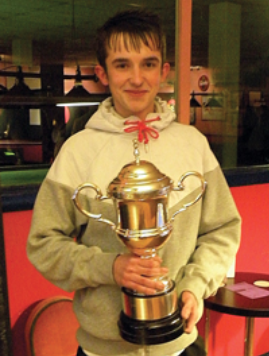 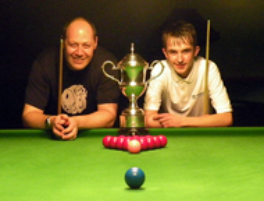 At just 17 years and 5 months, Matthew Howard from Rainham, became our youngest ever Kent Amateur Champion. He beat seasoned campaigner, Steve Wagon, 3-1 in a tense and exciting final. We had 35 entrants in this year's event and both finalists were arguably the form players of the day with Matt dropping very few frames on route to the final and Steve compiling a 111 break in an earlier match. This is Matt's second trophy of the season after claiming the Under 21s back in October. 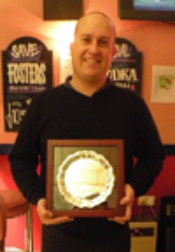 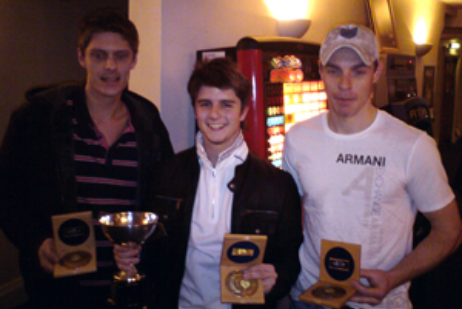 The Players Club team of Tony Sharp, Paul Williams and Ryan Miskin triumphed in the Kent Teams competition. The competition was run on a Round Robin format and the top two teams then played in a final. The other finalists were Danny Bush, Paul Harland and Rob Molinari, playing from the host club, Pockets in Gravesend but it was The Players Club that came through winning the final 4-2. 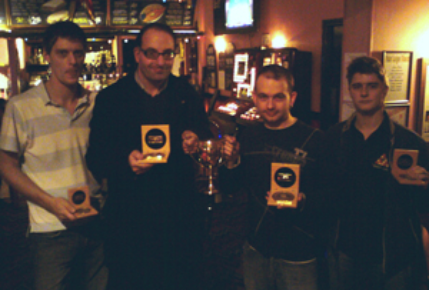 We had 11 entries for the Pairs competition held at The Players Club in Strood on 13th December. The Players Club's Danny Bush joined forces with Beckenham's David Rimer and took the title (pictured holding the trophy). Both players played well all day, beating Paul Sweeny and Simon Routledge in the semi-final and then Tony Sharp and Paul Williams in the final. Congratulations to Danny and David, both winning this title for the first time. 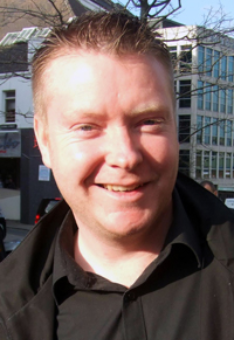 We had 41 entries in the Don Lee-Amies Testimonial held at the Players Club in Strood. Gerard Greene beat Danny Bush in the final. He also compiled the highest break of 90. Tony Sharp won the plate competition. A generous donation was made to Don in appreciation for his commitment to the game over the last 60 years.

You can read our tribute to Don on our Former Members page. 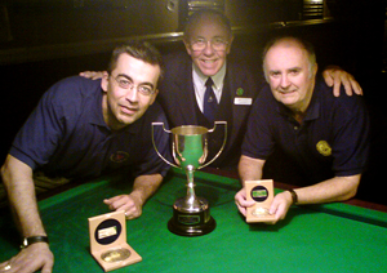 The tournament attracted 14 players. A Round Robin consisting of one group of four and two groups of five players was organised, with the winner of each group making the semi-finals and also the player with the best average score from the remaining field (regardless of the number of wins).

In the semi-finals, Andy Phillps overcame Neil Jefferis and Michael Wright beat Steve Wagon (best average score qualifier) to earn their places in the final. Andy proved too strong for Michael and came away with the title. 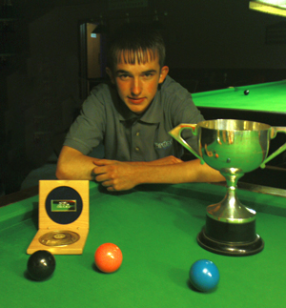 We had 8 entrants for this year's Under 21 event so it was run with 2 groups of 4 playing in a Round Robin format. The winner of Group 1 was Charlie Walters with Scott Bell finishing second and the winner of Group 2 was Matthew Howard, with Steven Whybrow finishing second. Charlie Walters beat Steven Whybrow in the first semi-final but then came up against the reigning champion Matthew Howard in the final who had defeated Scott Bell in the other semi. It proved to be Matthew's day again as he clinched a 3-1 victory to be crowned KCBSA Under 21 Champion for the third year in a row. The highest break of the day was a 68 by Scott Bell. 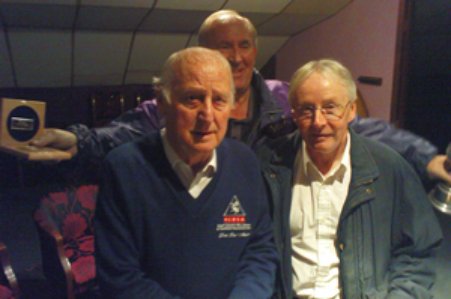 Our Veterans competition attracted 9 players so this too was run on a Round Robin format with the 9 entrants being split into 3 groups. The group winners were Stephen Hills, Tony Molineaux, and last years champion, David Smith. The fourth semi-final spot was given to the best group runner up which went to Max Bell, beating Derek Reynolds in a one frame play-off. In the semi-finals, Tony beat Stephen and David beat Max to set up a final between two players, neither of whom had lost a frame all day. It was Tony Molineaux that came out victorious, winning 2-0 and picking up the trophy for the very first time.
2008-09 SEASON