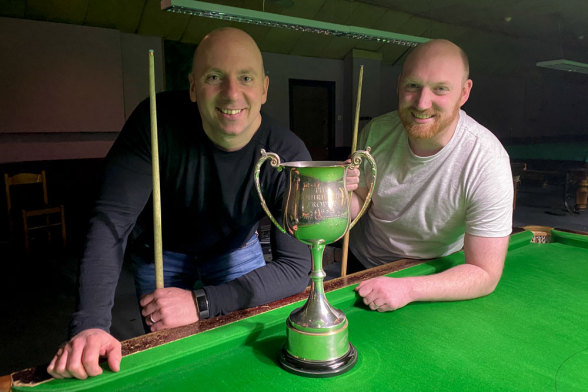 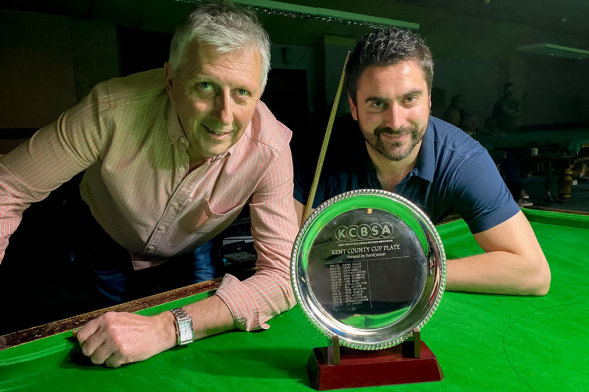 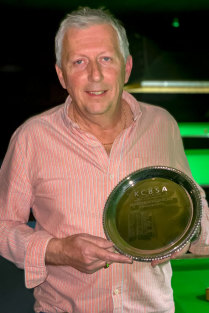 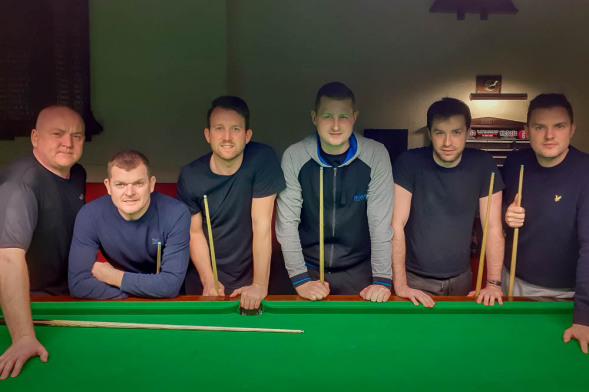 Slightly down on entries this year with just 6 entries but it was still a good competition and there were some very tight matches. It did mean that the format was easy to decide upon, we split into two groups of three teams with the top two from each group qualifying for the semi-finals. Both groups had one team winning both of their matches. 'Two Beards and a Baldy' beat 'Sevenoaks' and 'Good Bridge' to top Group 1 and 'Three Blind Mice' beat 'Greenhithe Legion' and 'SMR' to top Group 2.

'Good Bridge' then beat 'Sevenoaks' and 'SMR' beat 'The Legion' to setup the semi-finals, both of which then went the distance, finishing 3-3 and requiring a deciding frame to be played. The Two Beards, Ben Trowell and Rob South nominated their Baldy, Adam Holmes to play the decider for them. 'SMR' were Scott Bell, Matt Morgan and Ryan Tate and they nominated Scott. This proved a good decision as Scott got one chance and made a frame winning 60 break from it and there wasn't anything Adam could do about that.

In the other decider, Raj Puri and Mick Quinell nominated their 3rd Blind Mouse, Darren Martin to play. He faced Stuart Wood who was playing with Stephen Hartley and Keith Matthews with his new found 'Good Bridge'. Darren opened up a 30+ point lead but Stuart hit back with a 46 break. By the time they got to the pink the scores were level. Stuart then potted a good pink and sent the white around the angles to nudge the black off the side cushion and he calmly potted it in the middle pocket.

The final started with Stephen winning the first frame against Matt, Stuart doing the same against Ryan but Scott getting one back for SMR against Keith. Stephen then won his second frame too and when Keith levelled his match 1-1 with Scott that was enough to win the 'Good Bridge' team the title and the £120 prize. The final score was 4-2 with Runners Up 'SMR' taking away £60 for their efforts. 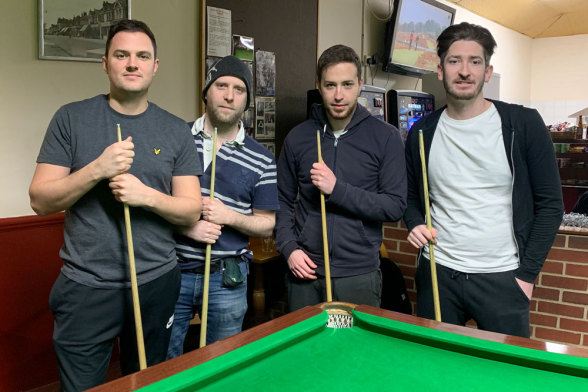 Format: Round Robin, all matches best-of-three frames, black ball shoot out to decide frame 3 (if required).  First and second places from each group qualify for the quarter-finals.  In the event of a tie the team with the best head-to-head record to go through.

For the last 5 years we’ve had at least 16 pairs and this year was no exception.  32 players filled the hall once again and so we decided to run a round robin.  4 groups of 4 pairs.

Group 2 couldn’t have been closer.  Ben & Paul Sizer won two but lost one on the dreaded black ball shoot out.  Jamie Dunlop & Steve Souter also won 2.  Keith Matthews & Amrik Cheema did exactly the same.  The head-to-head analysis couldn’t separate them.  A three-way tie was played.  Ben & Paul lost to Keith & Amrik in the first playoff frame and then lost to Jamie & Steve in the second and so were eliminated. Matt Morgan & James Burrows secured first place in Group 3 without dropping a single frame.  Alan Bailey & Eddie Bradstreet took second place with 2 wins.

Group 4 was also a close one.  Ben Trowell & Rob South, Mick Quinnell & Adam Holmes and Paul West & Paul Grottick all had 2 wins and one loss.  However, the head-to-head results were decisive.  Ben & Rob won the group with Mick & Adam taking second place.

The final was keenly fought. All four players contributing to a high quality match before Matt & James took the title with a 2-0 win over Scott & Phil.

Thanks to everyone for continuing to support the event and special thanks to John, Jo and Keith at Welling Snooker Club for their wonderful hospitality (I can recommend the hungry horse burger!). 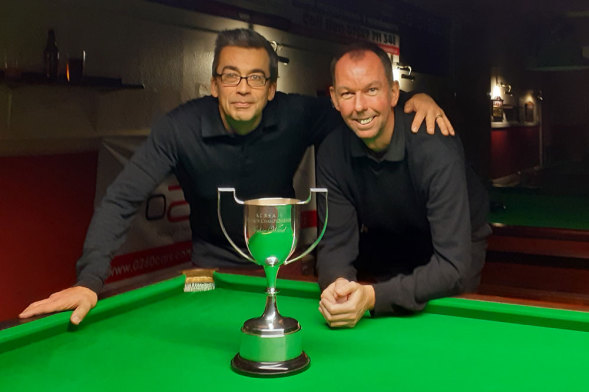 We had 9 entries in the Billiards at Victoria Snooker club this year. We had 9 last year too but this time we changed the format to give everyone more games. Instead of having 3 groups of 3 we split into groups of 4 players and 5. To make sure everyone played the same amount of games the group of 4 had to play their first opponent twice and we also decided that a fairer way to qualify for the semi-finals was to do it on total points scored rather than games won.

Neil started fast in the final building a quick 40 point lead but Andy hit back with a 48 break to move in front. It stayed close for a while but Neil managed to move ahead with a series of 20+ breaks and finished up winning 146 to 110.

The feedback from the players was positive for the format and a good day was had by all. 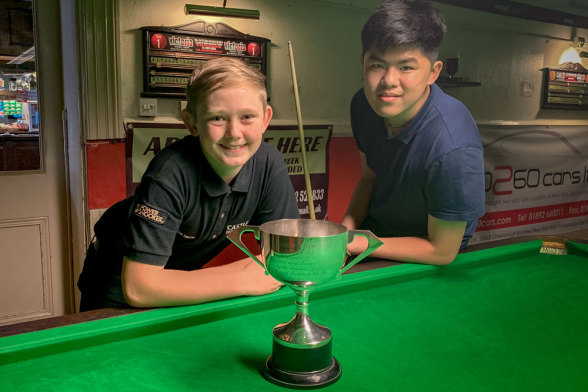 The final of the Under 21s was contested between our reigning Kent Under 16s Champion Dylan Smith (11) and Brandon Nguyen (14) over the best of nine frames.

A quick internet search on Dylan will show you that you’re watching someone special.  After taking the first two frames in convincing style (72-29 and 56-15) Dylan did not look back.

Brandon showed all of his fighting qualities in the third but Dylan forged ahead 37-32. Sensing victory, Dylan dominated the fourth (72-13) to lead 4-0.  Dylan needed just one more frame to become the first ever player to hold both the Kent U16s and U21s titles at the same time.

Brandon came back with strength and determination in the fifth, which went to the final black.  Dylan however wanted the whitewash and showed no mercy in completing an emphatic victory.

Congratulations Dylan on becoming what we believe is our youngest ever U21s champion.  It’s clear a bright future awaits and we look forward to seeing more of the same both in Kent and on the national stage. 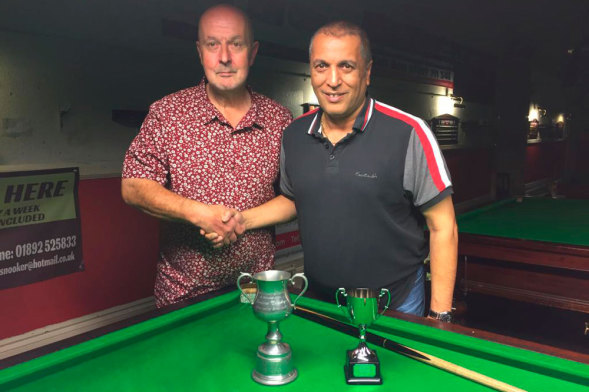 We had a fantastic 21 entries for the Veteran’s championship, competing in a straight knockout.  All matches were decided over the best-of-three frames, with a total prize pot of £210 (Winner £120, Runner Up £60, Losing Semi-finalists £15).

Five preliminary matches (all resulting in a 2-1 score line!) reduced the field to 16, including Malcom Smith’s match (finalist for the past two years) who fell to newcomer Ed Bradstreet.  New to the event, maybe, but no neophyte to snooker! Ed continued his winning ways in the top half of the draw brushing past Kevin Dixon (2-0), Trevor Gibb (2-1) and Mark Britton (2-0) to reach the final on his first attempt.

In the bottom half, defending champion Clive Underhill’s preliminary match was a close contest with Ray Martin.  Clive prevailed 2-1 and then pressed forward with a 2-0 win over Ivan Stevenage before eventually bowing out to Raj Puri 1-2 at the quarterfinal stage.  Stephen Hills dropped just one frame to reach the semi-final but Raj proved too strong.  Another experienced campaigner playing in the event for the first time, Raj secured his place in the final, 2-0.

Two debutants reached the final guaranteeing a new name on the trophy.  A tactical first frame with some inspired safety saw Raj take the lead 58-47.  Ed kept his cool in the second, levelling the match 49-37.  The decider proved unequivocal.  Raj stepped up through the gears at exactly the right time and took the title convincingly 70-19.

Congratulations to all who took part.  A strong field made for an exciting and entertaining day.  Will Raj successfully defend his title next year?  You will have to play well if you are going to stop him!