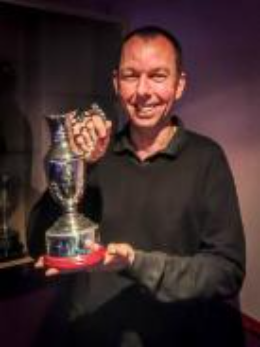 Our Treasurer, Neil Jefferis, won the Player of the Year award as he hung on to his slender five point lead over David Green to pip him to the winning post. 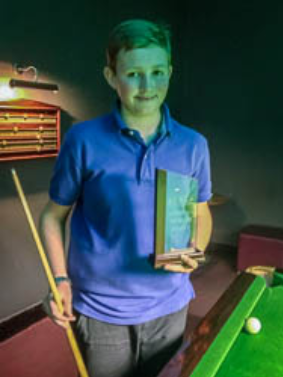 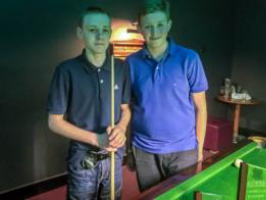 Seven youngsters turned out to compete in this year's Under 16s event at Riley's club in Gillingham. Once we finally got the table lights working we were under way with two groups of three and four to play a round robin best of three matches. Michael Loveridge-Greene, Jay Ricketts and Callum Haughin in one group, Ben Sizer, James Addison, Jordan Ravenhill and Andy Caine in the other. There were a few closely fought matches in the group stages notably the game between Jay and Callum which saw three black ball games with the winner being decided by a foul to see Jay win the decider.

Michael and Ben proved to be the strongest competitors in their respective groups and they went through to the final to play for the trophy and prize money. Ben took the first with some confident potting and looked set to take the title as he had a healthy lead as we got to the end game. But Michael pulled out all the stops to clear from green to black to nick it right from under Ben's nose. It appeared at this stage that Michael's experience might pay off come the final frame as he is the reigning champion and this being Ben's first season. The decider was again closely matched and finally Ben managed to edge a slight lead and then just hung on ball by ball until he potted the decisive pink and collect the £20 for his efforts. A great match and with both players being just 14 we may even see them in the final next year! 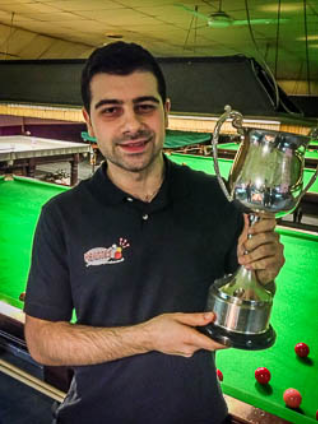 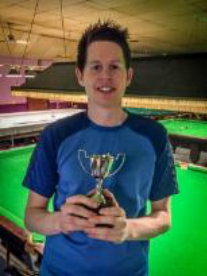 A magnificent full house of 64 players turned out once again for the Kent County Cup. This time we were sold out three weeks in advance and we even had 9 reserves on standby! A very high quality field of players from Kent and surrounding counties and because we had a full quota we were able to do the draw in advance and get underway at 10.20am.

Just about twelve hours later we were left with just two, Michael Georgiou from Forest Hill and John Parkin from Romford. These were probably the form players of the day as Michael had won most of his matches up until the final quite convincingly whereas John had the highest break of the day with a perfect ton!

The final was closely fought but a terrific 79 saw Michael take the first and then he stole the second with a clearance of the colours. However it was John's consistency that saw him win the third frame before Michael proved to have the edge as he won the fourth frame to claim his second County Cup. A terrific return to the Kent snooker circuit! Mr Georgiou took home our top prize of the season, a very acceptable £300 whilst Mr Parkin was content with £150. Losing semi finalists were Steve Crowley and John's brother Paul Parkin. See the completed drawsheet here.

In the Plate event, a formidable Ryan Causton swept all before him, cleaning up every match without dropping a frame. He took the £40 prize money after beating John Woolcott in the final.

Another great tournament draws to close and if there is one thing to be learnt from this it is that you really do need to get your entry in for this event very early in the season to guarantee your name on the draw sheet. 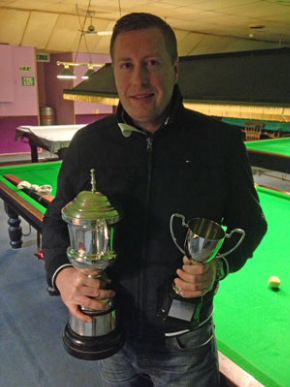 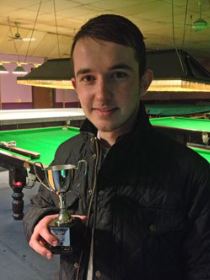 We had a very respectable 52 entries for our most prestigious competition, the Kent Amateur Championships held once again at Jordan's Club in Rainham. Eight more runners than last year which was a good turnout bearing in mind all the entries must live in Kent. The closely contested final saw Steve Crowley claim victory 3-1 over Matthew Howard and collect the £250 first prize, Matt took home £110 for his efforts. Steve was thrilled to win the Kent Amateur for the first time having been runner up in 2009.

Phil O'Kane and Neil Jefferis picked up 50 quid each for reaching the semi-finals and David Green claimed the highest break of the day with a 90 he made in the second round despite leaving 51 points on the table! Nice to see the '89 and '96 champion, Amrik Cheema come out of retirement and make a good account for himself before losing to Adam Holmes in the Third Round. See the full draw here 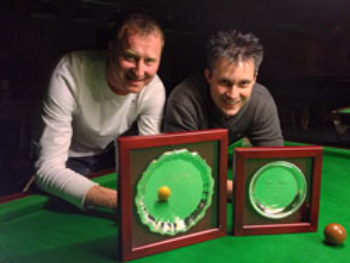 In the Tom Ashton Memorial Plate we saw Glenn Winter (pictured right) pip Mark Rotherham to the post 2-1 and he picked up £40 for his efforts.

The Player of the Year is hotting up and Neil Jefferis has raced into the lead after collecting a terrific haul of 30 points. With just one big event left to play the POTY prize must surely be a two horse race between Neil and David Green.

We now move on to our Open competition, the Kent County Cup also to be held at Jordan's on Sunday March 17th. If you are interested in taking part, you should get your entry in soon as this comp sold out last year. 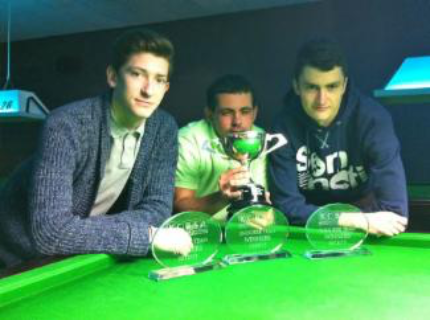 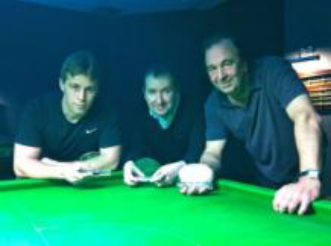 We had six teams enter this year and from a wide spread of Kent locations. The Committee entered their usual team together with Hartley Club but we also had teams from Bromley (Dream Team II), Canterbury, Margate and Sidcup. We split into two groups and played a Round Robin format so each team would get at least two matches. Margate won their group convincingly, beating the Committee team 5-1 and Canterbury 6-0 to take their place in the final. The other group was a lot closer but Bromley's 4-2 win over Sidcup proved decisive and they won the group by just one frame.

In the final though, Margate didn't have it quite so easy and it was the Dream Team II that raced away to a 3-0 lead. Margate pegged two back but the Dream Team II held on and got a deserved 4-2 victory to take the title and the £90 first prize. Margate received £30 for their efforts.

This win puts David Green clear at the top of the POTY table with the two big events still to come. Can anyone come out of the pack to challenge him? We'll find out on Feb 10th. 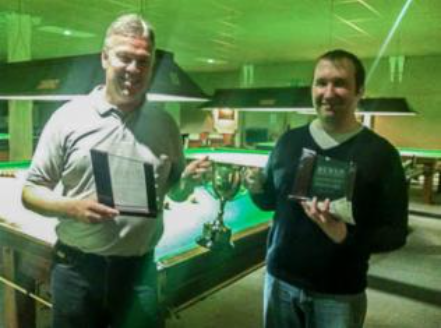 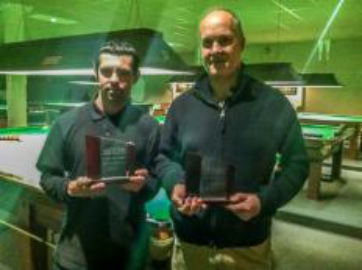 We returned to Northdown Snooker Club for the Pairs competition this year. We had 12 entries and 4 of these were from the club's membership so a good support from the host venue. We ran it as a knockout tournament with each match being best of 5 frames. Dave Manley and Andy Sage breezed into the final from the bottom half of the draw but David Green and John Woolcott had some much closer battles in the top half on their route through.

David and John started reasonably well in the first frame of the final but Dave and Andy managed to turn it around and take what was a good quality quick fire battle. They continued with that momentum and took the second and then Andy Sage finished off the match with an impressive 73 break to take the third and claim the title for the pair at their first attempt. They also got £120 between them for their win with David Green and John Woolcott picking up £60.

Runners Up for David Green puts him joint top of the Player of the Year points as the competition starts to warm up. 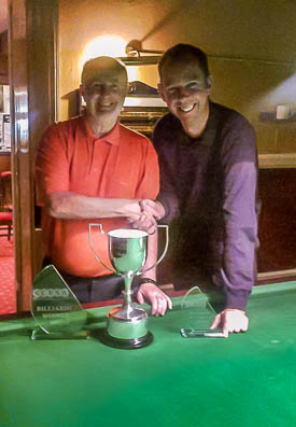 We had 8 entries this year for the Billiards Championships. This number is lower than recent years which was a shame but at least it made it an easy choice as to the format for the day. We had two groups of 4 playing a Round Robin with each match lasting an hour. The final tables can be seen here. Neil Jefferis won group 1 with Leo Hare runner up and Michael Wright won group 2 with David Smith runner up. That meant that Neil played David in one semi-final and Leo played Michael in the other. Neil and Michael both won and then played the final. Michael started very fast with a 48 break and kept that momentum throughout the match. Neil got a consolation 47 break towards the end of the hour but Michael was too far in front and claimed the £100 first prize and title for the first time, eventually winning 192 points to 167. 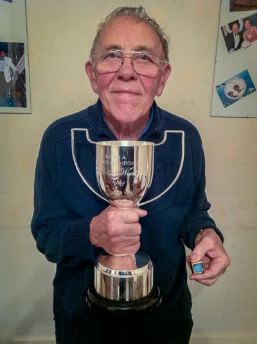 Just before this event we had the Billiards cup re-silvered and retitled the "Archie Wood Trophy" as a tribute to the dedication Archie had given the three ball game over the years. You can read more about Archie on our Former Members page. 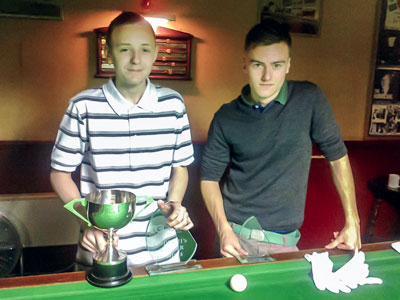 After the disappointment of last years event the Under 21's competition this year has to go down as a success. We only had 4 players but they were all 16 years old or younger so hopefully they will be returning to compete again for a few years to come. We ran the competition as a Round Robin format so each player got at least 3 games, each one best of 3 frames. The top two from the group stage were Michael Loveridge-Greene, our current Under 16's champion and Jordan Grimshaw. It was a very close final but Michael came through winning the tense deciding frame to take the match 3-2. Jordan had the consolation of getting the highest break of the day, a 34. 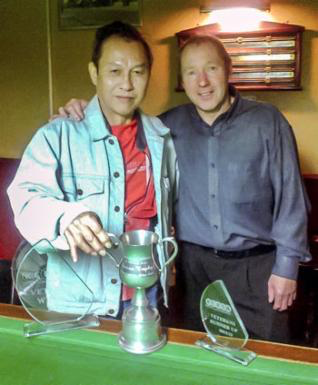 We had 10 entries for the Veterans competition this year. We ran a knockout tournament with each match best of 3 frames. The semi-finals saw Johnny Wan beat Tony Pink 2-1 and last year's champion, Stephen Hills overcoming Ron Goodwin also by 2 frames to 1. Stephen was finding it hard work trying to defend his title with each match going to a deciding frame. The final against Johnny Wan also went to the decider but it was Johnny who triumphed to claim the title for the first time.
2011-12 SEASON