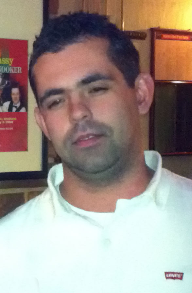 Before the Kent County Cup event started we had three names in the frame heading the table. David Green, Paul West and Daren Mirza. A more successful run than the other two could possibly see them win the top prize. Well David had a small lead over the other two and he cemented that as he managed to win two matches and secure his name top of the leaderboard for the first time. Well done David! 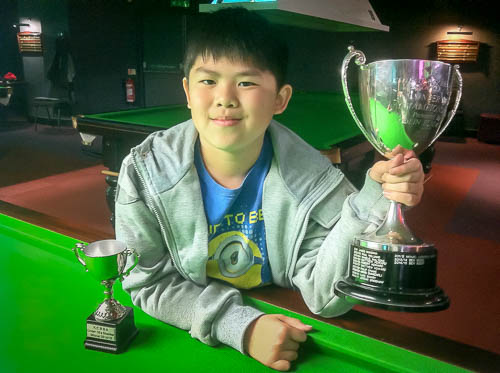 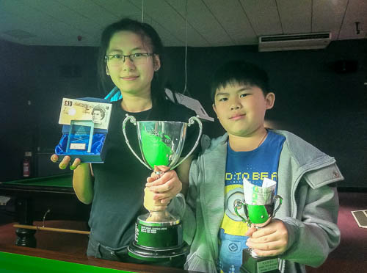 Format: Round Robin, all matches best of 3.

Brandon secured an early advantage with a 2-0 win over Katie.

Unfazed, Katie started well in her second match by winning the first frame. Oliver defended well to take the second, before Katie clinched the decider.

Oliver got the better start by winning the first but Brandon took the second. It all came down to the final frame Brandon found himself 18 points behind with only the last three colours remaining. Brandon kept his composure by potting the blue, pink and black to force a respotted black. Brandon won the toss and elected Oliver to play. After a short safety exchange Brandon potted the black in the centre pocket to secure the title. 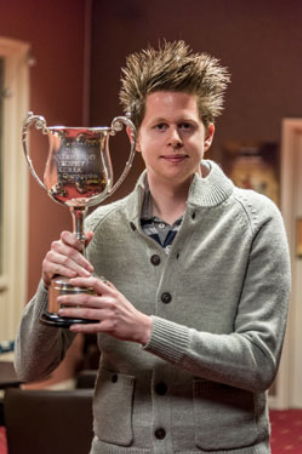 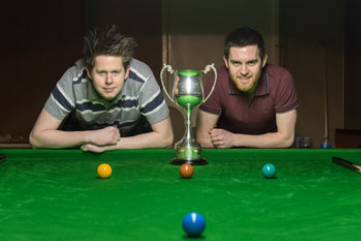 We were yet again blessed with another full complement of entries even with the new venue. Defending champion Zak Surety was competing but this time having to give 28 start because of his new professional status. We had two other pros in the field, Michael Georgiou and Jak Jones who had come all the way from Wales!

With the draw already made we could get going promptly at 10am. As this event grows we have a much wider spread of competitors coming from all over but it's still predominantly Kent players and the full draw can be downloaded from the link above.

In the top half of the draw James Height traveled over from the West Country to take part and did well to get to Quarter Finals before losing out to Zak who made a 124 break. But Zak would go no further than the Semi Final as he lost three nil to Jak Jones (who beat Neil Jefferis in the Quarters) as both pros played off level.

Meanwhile in the bottom half John Parkin beat John Meaney 3-0 knocking in a magnificent 134 break along the way; and it could have been even better as he missed the final black! Meanwhile Matthew Howard put in a great performance to beat Mark Cackett 3-1. So we were left with the final four. Jak beat Zak whilst a tight encounter between Parkin and Howard saw it go all the way and finish 3-2 to John.

The 28 start John had over Jak in the final proved decisive and the man from Essex with the spiky hair defeated the man from Wales three frames to one. John took home £300 for his efforts plus £10 for his highest break of the day plus the title of Kent County Cup Champion 2014-15. Jak collected £140 for his runner-up placing.

The completed draw for the event can be seen here... 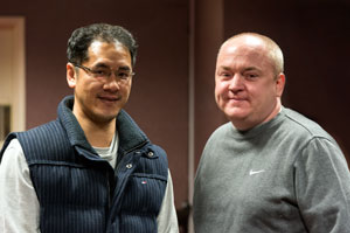 Meanwhile the Plate event for first game losers was running alongside the main event. This saw Keith Matthews (pictured right) take on Jon Yuen (owner of Welling Snooker Club) in the final. Keith came out on top and took home £40 reward. 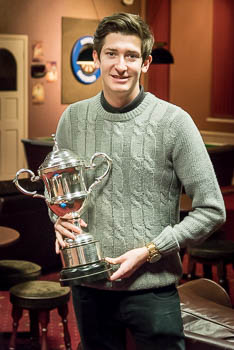 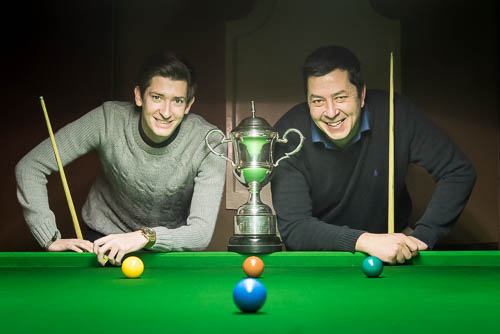 We had 57 entrants for this competition which was not far short of the maximum 64. This is pleasing for us as it was a new venue for one of the bigger competitions and it was good to see so many people support the event. It was nice to see plenty of new faces and also some older ones that had decided to dust off the cue again and make a return. Hopefully everyone enjoyed it and will be encouraged to enter the County Cup on 22nd March at the same venue.

The top half of the draw saw Daren Mirza win his place in the final, winning 3 last frame deciders on the way including the semi-final against Steve Crowley which went to the final black.

Phil O'Kane breezed through the bottom half of the draw beating the defending champion Mark Cackett on route and also Lee Martin in the semi-final which included an 81, the highest break of the day.

In the final, Phil continued his excellent form knocking in two 50+ breaks to win the first two frames. Daren tried to get back into the match but Phil was just too good and closed out the match 3-0 to win the £250 first prize and the title of Kent Amateur Champion for the first time. Daren took home £120 for his efforts. 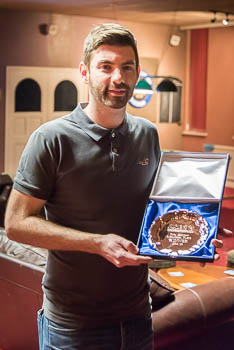 The Tom Ashton Memorial Plate competition was won by Ben Trowell, pictured above. The Runner-Up was John Woolcott.

The Player of the Year trophy is still up for grabs. It looks like being between David Green, Paul West and Daren Mirza with just the Kent County Cup to play.

The completed draw for the event can be seen here... 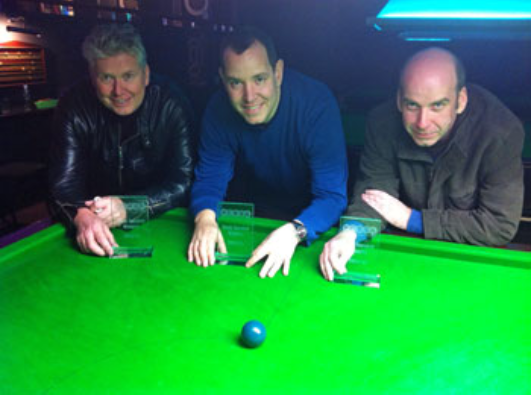 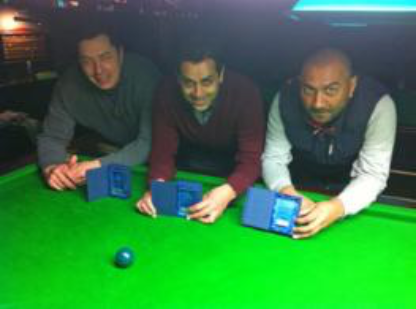 We had 9 teams this year so we split into 3 groups of 3 and played a Round Robin format. Each player plays two frames against their opponent so 6 frames are up for grabs in each match. In Group 1 the winners were Bromley who won both of their matches 4-2. In Group 2 both Stone Street and Margate qualified for the semi-finals with one win and a draw each. In Group 3 it was Sidcup that went through also with a win and a draw. The semi-final draw put Stone Street against Margate again and Bromley against Sidcup. Stone Street managed a 4-2 victory over Margate this time but the second semi-final went to 3-3 so a single frame decider had to be played. Daren Mirza was nominated by his team mates to represent Sidcup and David Green had the responsibility for Bromley and it was Daren who was victorious in a close frame.

The final between Stone Street and Sidcup also went 3-3 to the delight of the spectators so another single frame decider was required. Daren was again the man for Sidcup and it was Sean Halligan who stepped up for Stone Street. Daren didn't really get a chance as Sean played a near faultless frame opening with a 50 break and then following it with a 35 and clinching the title for his team. Sean, Andy and Andy won £120 between them and the title at their first attempt and Daren, Amrik and Vinny took home £60. 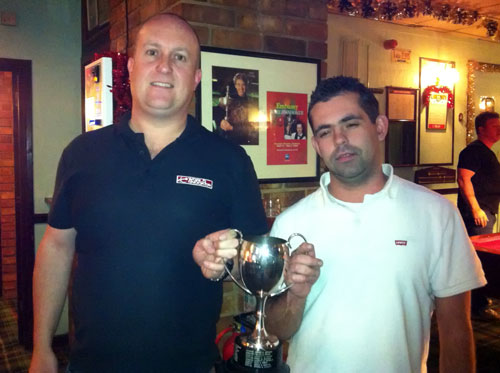 We had 16 pairs enter the tournament which is slightly higher than recent years so very encouraging. It was also good as it made the knockout draw easy. Each match was played over the best of 3 frames and there were plenty of tight ones. Adam Holmes and David Green won all of their matches in the deciding frames to get to the final where they played Adrian Frisby and Neil Jefferis who had also had a couple of marathon games to get there. The final was another hard fought match with Adam and David winning in the deciding frame again to win the title. You can see from the picture above how much the effort took out of David but his reward was a share of the title and the £160 winners prize. Adrian and Neil shared the £80 runners-up prize.

The win means that David Green joins Paul West at the top of the POTY table with Adrian Frisby jumping up to 3rd. 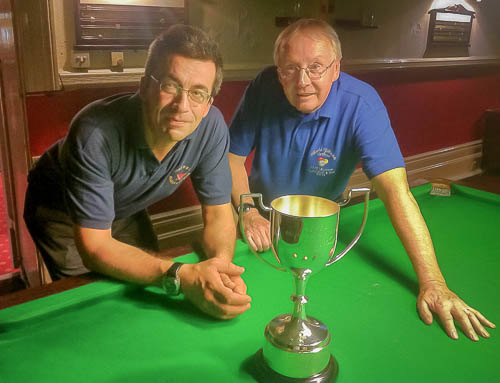 We had 9 entrants to the Billiards competition this year. Unfortunately the date clashed with the English Amateur qualifiers so we will make sure we choose a date later in the month next year to avoid that. Is that where you were, Mr Cheema, Mr Hartley? Most of the regulars were still there though and the competition was still strong. We split them into 3 groups of 3 players for the Round Robin stage with the group winners making the semi-finals together with the highest points scoring runner-up.

David Smith beat Ivan Stevenage and Trevor Gibb to earn his spot in the semi-finals. He then played David Green who had scored an impressive 310 points in both of his matches, beating Paul West and Leo Hare. He wasn't quite able to keep that scoring going in the semi-final though and it was David Smith who won 284-169.

The other semi-final was between Leo Hare, who was the highest scoring group runner-up, and Andy Phillips who had won his group by beating Adrian Frisby and Tony West. It was not to be Leo's day though as Andy ran out the comfortable winner 298-127.

Andy continued his strong form in the final against David Smith. At the end of the hour the scores were 247-142 and Andy Phillips was champion once again. He proved again to be the dominant player of the era claiming the title for the 7th time.

The Player of the Year points table is starting to take shape and it is Paul West from Margate that has the early lead. Next event to try and get some points is the Pairs Snooker at Petts Wood. 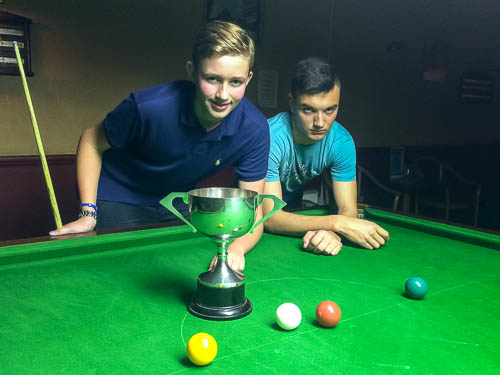 There were 5 entrants in the Under 21s so we ran a Round Robin competition with each match being best of 3 frames. The 5 players were Ben Sizer, James Addison-May, Katie Nguyen, Oliver Wilson and Brandon Nguyen who was the youngest entrant at only 9 years old. There were some good close matches during the group stage but it was Ben and James who proved too strong on the day, both winning all their matches against the others and thus qualifying for the final. Ben had knocked in a 42 break in the group matches, the highest of the day and it was he who took the first frame in the final. James fought back and took the next to force a decider but it was Ben's day again as he took the final frame and the title for the second year running. He also won £35 and James picked up £15 as Runner-up. 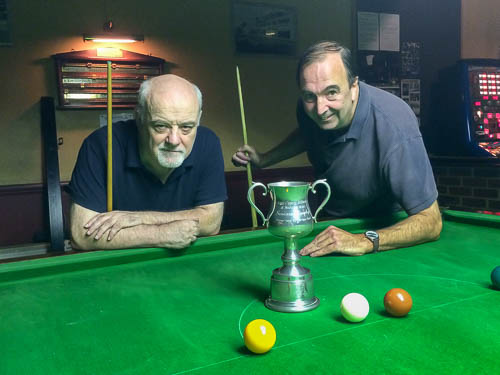 The Veterans competition had an unprecedented 18 entrants with several new faces. The competition was run as a straight knockout with each match being the best of 3 frames. The top half of the draw saw local members Keith Taylor and Pat Casserly winning through to the semi-finals. Keith beat last years Runner-up Ron Goodwin on his route through and Pat beat past champions Tony Molineaux and Stephen Hills on his. Pat continued his good form and beat Keith to get to the final.

The bottom half saw John Woolcott make a match winning 49 break against Tony Holdstock to earn a semi-final place where he met last year's winner Paul West. Paul continued his winning run and beat John 2-0. He then managed the same score against Pat in the final to successfully defend his title. He also won £100 for his efforts and Pat took home £50.