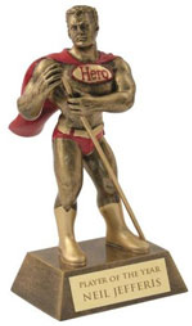 Neil's win in the Kent County Cup Plate secured him enough points to see him claim Player of the Year for the second consecutive season. As you can see... this achievement was only topped by the trophy he bought (for himself I might add) which is quite a sight to behold! 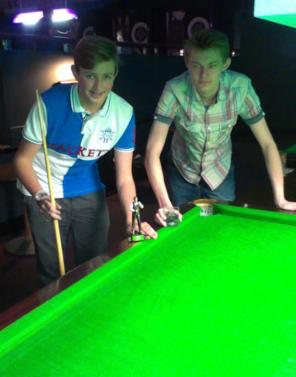 Possibly due to the good weather we only saw three players compete for the Colin Summers Cup this year. The entrants were Ben Sizer, Jay Ricketts and Oliver Wilson. As is the usual format we ran a Round Robin event. In the first match Ben beat Jay 2-0, then Jay beat Oliver 2-0 and finally Ben beat Oliver 2-0 which saw Ben retain the title he won twelve months before and go with the Under 21s title he picked up back in October. Although there was only a small turnout they all agreed that they had enjoyed the day. Ben took £20 for his win and runner up Jay went home with £10 for his efforts. 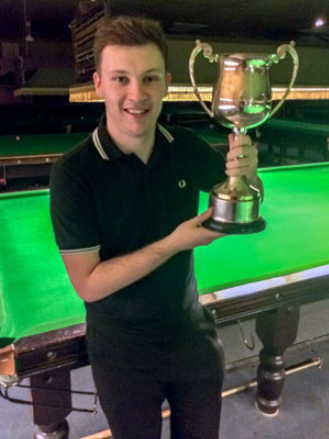 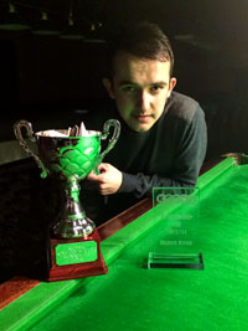 Once again another full house for the Kent County Cup which was tremendous and we even had all 64 players paid up before the day which meant we could stagger the start times in an effort try and finish sometime before sunrise!

With this being an Open competition we had many of the usual crowd in from Essex and even Harvey Chandler made the trek down from Northampton to take part. Gerard Greene was the only pro competing and the 28 start he gave proved decisive in his second round match against Ricky Norris.

In comparison to the Kent Amateur, this was a walk in the park as we were able to start at 10am and with the results coming at a rapid pace we had both main and Plate final started at 9pm - some four hours earlier than the previous tournament.

Last year's finalist, John Parkin was looking good as he knocked in an 85 but it wasn't enough to see him beat David Green who came back from two nil down to win 3-2.

Lee Martin had a bizarre climax to his third round as he was well in front with his opponent Dean Galbally needing three snookers on the pink. Dean actually got five snookers and all the points required to get back in it then potted the pink for Lee to need the black for a respot. However Lee who knocked it in and then potted the respotted black to win the match.

Nigel Howe played very well and hadn't dropped a frame as he faced local boy, Matt Howard in the semi final. But Nigel came up against a man just about to hit form and Matt rattled off three frames to whitewash his opponent with breaks of 86 and 107 along the way.

Meanwhile in the other semi, Essex boy Zak Surety was playing Kent's, Phil O'Kane. Zak proved too consistent for Phil and even though the fourth frame could have gone either way, it was Zak who came out on top winning 3-1.

So Matt played Zak in the final and the young man from Rainham took the first with an accomplished 47 break. But Zak showed his skills by fighting back to win the next two frames and proved too strong for Matt in the fourth to take the title for the first time. Well done to Zak for his performance throughout the day, he took home £300 prize money plus the title of Kent County Cup champion 2014. Matt won £140 for runner-up and a further £10 for his 107 he made in the semi-final. 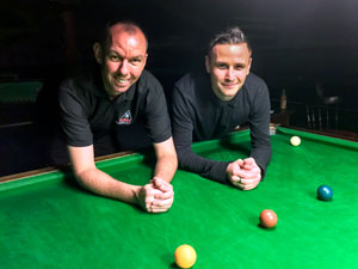 In the Plate competition, Neil Jefferis prevailed once again making it two Plate trophy wins in a row after he beat Gary Livermore in the final 2-1 and took home £60 for his victory. 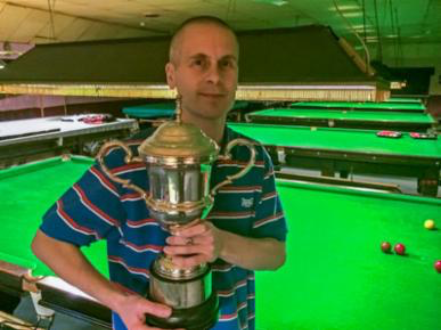 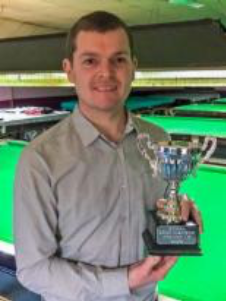 WOW... A new record for the KCBSA and history has been made!

For the first time since it became a one-day event we achieved a full house of 64 entrants! In fact we actually had 67 players take part and we had to have a preliminary round to accommodate the extra players. We kicked off the event with a presentation of trophies from previous competitions from the season and then the marathon day began. And what a day it was! With so many players (and a Plate competition) the knock-on effect of this created a long day! One by one, the rounds passed and it was gone Midnight when the semi-finals started! A scintillating Mark Cackett (Ashford) beat Adam Holmes in one and the tenacious Steve Hartley (New Ash Green) beat Tim Cosens in the other. Both losing semi finalists took home £60 each.

Meanwhile the Tom Ashton Memorial Plate event was running alongside and Neil Jefferis managed to edge past an exhausted Dan Brazier in an exciting final which ran to the full three frames. Neil took £60 for his efforts and Dan took home £30. Neil's good run has given him a narrow lead in the Player of the Year standings as we head in to the final event of the season.

And so to the final...
It was five minutes past one when the balls were racked up, and despite the time, both players were keen to play out the full best of five. The first two frames were shared and the third could not have been any closer as Steve managed to clear the colours to force a respotted black and then played a reasonable safety to try and put the black on the side cushion. However Mark fancied his chances and slammed in the black from the full length of the table to go 2-1 up. But Steve is a very determined player and he fought back to win the next and make it two all. So with memories of the Davis Taylor 85 World Final in mind, at half past two in the morning we embarked on the final frame of the tournament and like two heavy weights they slugged this one right out to the end as well and it was Mark that potted the final pink to win the tournament.

Both players were running on their battery reserves at the end and nearly a dozen people stayed right through until the final ball went down at 2.51am. A fantastic day, a real slog at times but highly rewarding none-the-less, especially for Mark as he collected £300 for his win plus £10 for the highest break of the day (79) and Steve bagged £140 for his long shift. 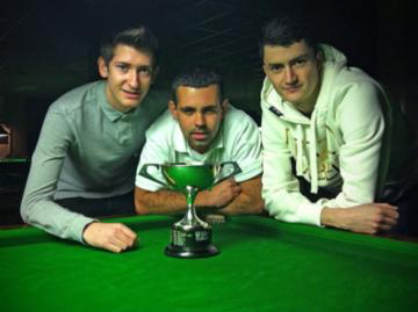 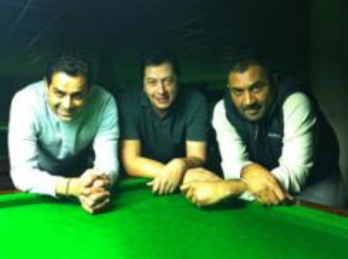 We had 6 teams competing at Northdown Snooker Club in Margate so we ran the event as a Round Robin. The draw put Hartley, Sidcup and Margate B in one group and The Committee, The Dreamteam and Margate A in the other. The winning team from each group would qualify for the final. A 5-1 win for Sidcup against Margate B proved to be the deciding result in the first group to put Sidcup in the final. They would play The Dreamteam who had qualified with the help of a 6-0 win over Margate A.

The final finished 3-3 so we had to have a one frame decider. Amrik Cheema represented his Sidcup team and The Dreamteam nominated Phil O'Kane. It was a tight frame with Phil taking the lead with a 39 break. Amrik then fought back but a telling snooker from Phil and a few misses from Amrik proved decisive and The Dreamteam were confirmed champions for the second year running. The Dreamteam got £90 for their win and Sidcup took £30.

With the two big competitions remaining this season there is a 3-way tie at the top of the Player of the Year standings. 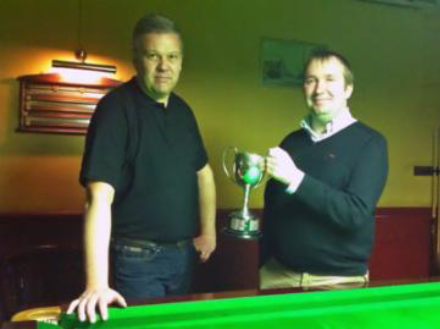 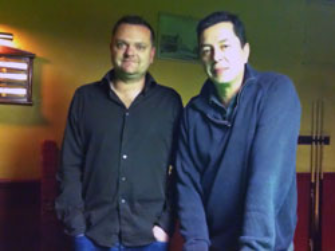 There were 12 pairs on the day so we ran the competition as a standard knockout tournament with each match over the best of 5 frames. John Meaney and Daren Mirza managed to get through to the final from the top half of the draw winning a couple of really tight games. In the bottom half, last year's winners, Dave Manley and Andy Sage had a bye in the first round and then met Paul West and Simon Fagg who they had travelled up with from Margate. Dave and Andy managed a 3-1 win.

From then on though they didn't drop another frame as they won their semi-final 3-0 and then beat John and Daren 3-0 in the final to successfully defend their Kent Snooker Pairs title. Dave and Andy won £120 and John and Daren took £60. 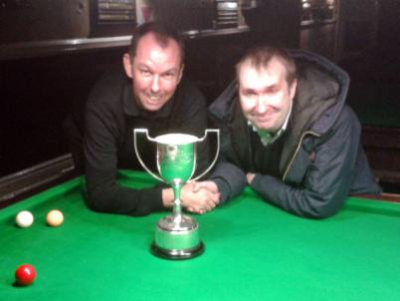 We had 14 entries for the Billiards and ran it again as a Round Robin, splitting into two groups of 5 and one group of 4. Each game was played over 45 minutes and the person from each group who won the most games automatically qualified for the semi-finals. Will Willard won all of his games as did Leo Hare and Neil Jefferis. The fourth semi-finalist was the player who finished runner up in a group and had the highest average score per game played and that was Dave Manley.

The semi-final draw put Neil against Leo, and Dave against Will in matches played over one hour. Neil made a 65 break on his way to beating Leo, and Dave amassed an impressive 308 points to overcome Will in a high scoring match with 516 points scored between them in the hour. In the final Neil got ahead early and built a lead of over 100 points. Dave fought back but time was against him and in the end Neil was victorious, winning by 237 to 188 and claiming the title of Kent Billiards Champion for the second time. The first came in 2000 and there had been a Jimmy White like 6 times Runner Up positions since then before finally getting this win. Never give up Jimmy, you never know! 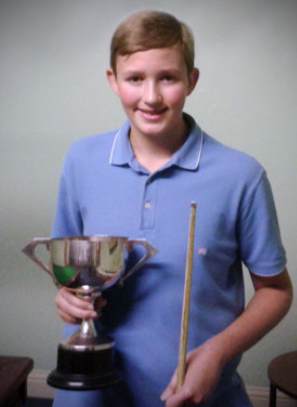 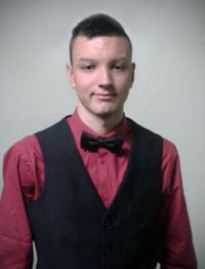 Only three entries for the Under 21s this year so we ran a Round Robin format where the players played each other twice. Coming into the final match of the second rotation the title was still up for grabs. Ben Sizer (pictured left) needed to beat James Addison (pictured right) to claim the title. Michael Loveridge-Greene was hoping for James to win as that would have meant a 3-way tie and a chance for him to hang on to his title.

It wasn't to be for Michael as Ben won that final match and topped the group to become Kent Under 21s champion for the first time and take the £30 first prize, he now holds both the Under 21 and Under 16 titles. The highest break prize was won by James Addison. 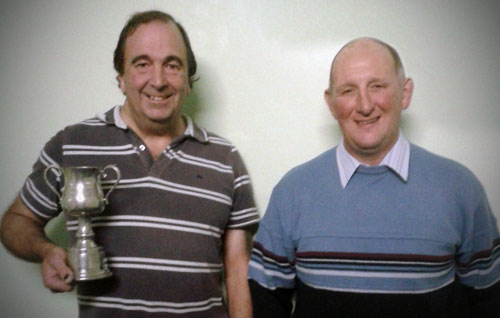 We had 10 entries for the Veterans so we ran it as a straight knockout competition. In the semi-finals Paul West (pictured left) beat Veterans newcomer Trevor Whitnall and Ron Goodwin (pictured right) beat the 2011 champion Stephen Hills. In the final, Paul who had sat in a traffic jam on the M2 for an hour on his way from Margate, beat Ron 2-0 to take the title of Kent Veterans champion for the first time. He won £70 for his efforts and Ron took £30.
2012-13 SEASON