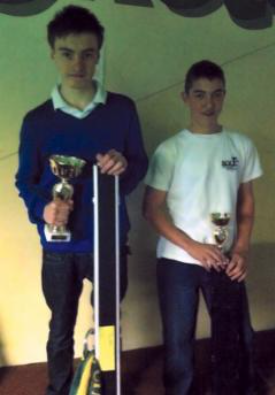 Our final tournament of the season was our Under 16s event this year held at Pockets in Gravesend. We had 6 entries this year and so we decided to play one group Round Robin so everyone would get plenty of matches. Good to see a couple of new faces in Callum Harland, Lawrence Mann and a potential star player in Lee White. Returning players, Matt Hodges, Callum Haughian and Jordan Grimshaw made up the numbers.

After the group stages, Jordan and Lee were the two stand out contenders of the day and the final was contested over the best of three which Jordan took the victory 2-0 going one better than the runner-up spot he received last year. He played very consistently in all his matches and we wish him well for snooker competitions in the future. A good day had by all and nice to see plenty of support for the youngsters, let's hope we see them all again for the Under 21s in October. 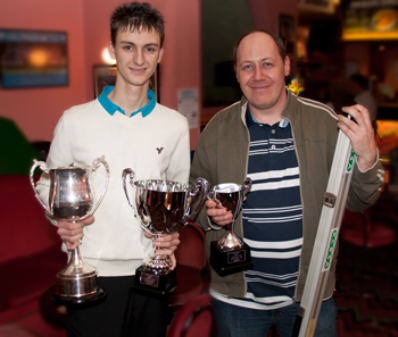 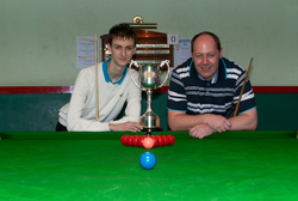 Another terrific turnout of 60 players for our Pro-Am this year held at the Players Club in Strood. We did in fact have 68 names on the list but for one reason or another not everyone turned up so we have now proven that we can regularly host snooker events that attract a healthy attendance. Ryan Causton claimed his first KCBSA victory (and £270) with a very accomplished 3-0 win over Steve Wagon. This became Steve's 6th consecutive final that he has lost in and we are now thinking of nicknaming him "Whirlwind!"

Ryan played supremely well all day and even managed to knock out a strong contender and fellow competitor, Ricky Norris who had made the highest break of the day, 114, earlier in the day. Steve defeated professional Gerard Greene in the semi-final as he did last year but once again couldn't quite go that final step and lift the trophy... maybe next year Steve? 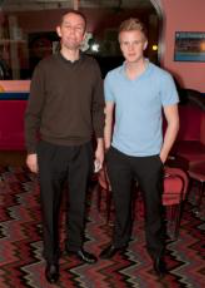 Meanwhile in the Plate, our Treasurer, Neil Jefferis played very solidly to capture the top prize. In a close final with Nathan WIlliams who came all the way from Wiltshire to take part. It went to a deciding frame where Neil managed to assert a commanding lead that saw him the victor for the first time.

With the popularity of this event and the Kent Amateur Championships, it will be strongly advised to get your entry in as soon as the dates are announced at the AGM in August because they are very likely to be over subscribed! 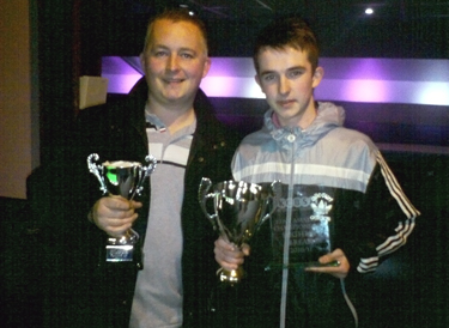 By way of a change, the Kent Amateur Championships were held this year at Jordan's Pool and Snooker Lounge in Rainham. We had our biggest entry for many years with a magnificent 61 players supporting the event. It was also great to see many players stay to watch what turned out to be a fantastic Final between Matt Howard and Lee Martin. Both players played some excellent snooker but it was Matt who came out on top winning 3-2 on the final black in a tense and enthralling deciding frame. Matt was the defending champion so congratulations to him for hanging on to his title. He also took the highest break prize with an impressive 104 in his Quarter Final match (still 43 left on the table, I'll let you do the maths). 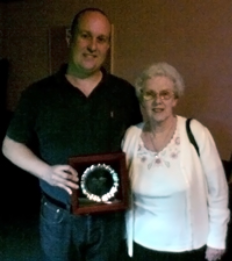 The Tom Ashton Memorial Plate competition was also defended by last year's winner, Adam Holmes, who knocked out Steve Wagon in the final. Adam can be seen pictured receiving the Plate trophy from Sheila Ashton.

Let's hope for the magic 64 next year, you'll have to get your entry in early!

Following on from our successful day we received an email from one of our veteran players, Tony Pink, very complimentary to his opponent and gracious in defeat. Let's hope his grandson is inspired and we see him playing in the future years...

Thank you for arranging yesterday's tournament.
Although I lost 3-0 to Pat Kennedy, It was a fine match, and I enjoyed losing to him if you can understand that. I typed an account to my grandson this morning of his last three shots which reminded me of a finish with which Alex Higgins once amazed me. It was a joy to behold even if I was on the wrong end of it!

We both played my sort of 'mean' game, and he was meaner than me... his finalé was exquisite.

Third frame, I was leading and got the brown and blue, but missing the pink. He needed a snooker. The black was stuck on the cushion halfway from the centre pocket to the green pocket. I thought, well he can't pot the pink, he needs a snooker... and then he will need to move the black off the cushion!

Hmm! - He played off the pink round the table and the white came up to rest tight against the black so I could not see the pink, which was over the yellow pocket. I had to go right down the table and back up again. I thought if I miss it coming back up it will pop around the cushions and is bound to hit it.... but no such luck! It ran all around it and didn't hit the bloody thing.

Then I thought, well if he pots the pink, then he will have to move the black and I will have him! He potted the pink and his white came back across the table and "kissed" the black along the cushion to sit exactly over the centre pocket... brilliant! a two year old couldn't miss that - his frame, set and match! 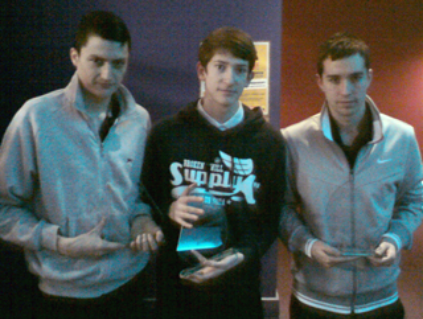 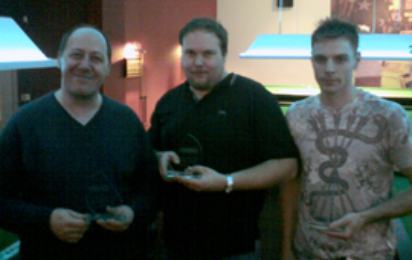 The Kent Teams competition took place at Rileys in Gillingham. There were 7 teams in total so we ran the competition as a knockout event. There were some amusing team names. 'Too hot to handle' ended up being a lot colder than they thought and 'Norfolk N Chance' also fell in the first round. It was the aptly named 'Dreamteam' that ended up as the Winners. Philip O'Kane, Scott Bell and Darren Brogden come out 4-2 winners in the final, beating 'The Players' who were Mark Devonshire, Steve Wagon and Ryan Miskin. 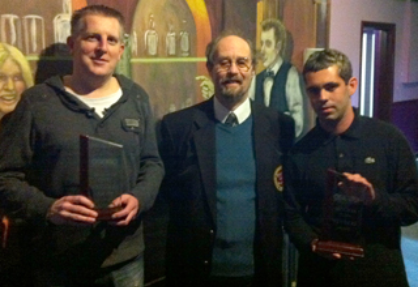 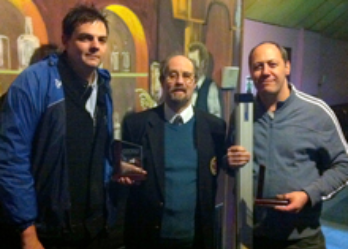 The Kent Pairs Snooker Competition was held at Jordan's Snooker Lounge in Rainham on Dec 12th. We had 15 pairs enter which was 4 more than last year.

We had a knockout competition with each match being best of five frames. The winners were Gary Martyn and David Green, beating Steve Wagon and Matt Simpson 3-0 in the final and only dropping one frame all day. We had sufficient players to run a plate competition for first match losers and this was won by Adrian Frisby and Neil Jefferis, beating Dan Richards and Graham Rowe in the final. 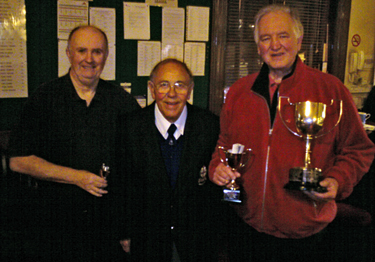 The Billiards Championships were held on Sunday 21st November 2010, again at the Victoria Snooker Club in Tunbridge Wells. We had 12 entries so the competition was run on a Round Robin basis with three groups each containing four players. Each match was played over an hour. The winner from each group qualified for the semifinals together with the highest scoring group runner up. The group winners were David Smith, Michael Wright and Steve Wagon, with Leo Hare making up the final four, qualifying as the highest scoring runner up.

Michael Wright beat David Smith in their semi-final whilst Leo Hare ran out the winner over Steve Wagon. The final was a good quality game and with 3 minutes to go the scores were dead level, but Leo had the momentum and managed to pull away to win the match 235 points to 202 and claim the title of Kent Billiards Champion for the first time. 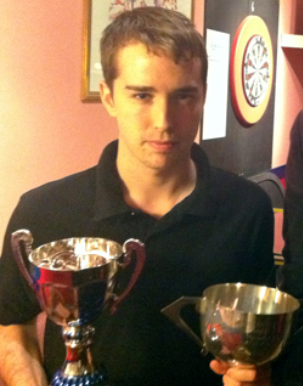 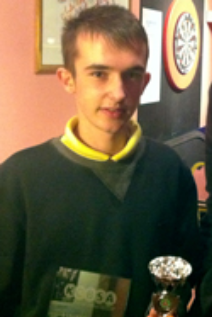 Finally with his last throw of the dice, Scott Bell claims the KCBSA Under 21s crown. Sadly only 5 entrants took part, Scott, Matthew Howard, Luke Bowry, Ryan Bryson-Payne and Adam Bassoo so we opted for a round robin. The winner couldn't be decided until the final match between Scott and Luke but it was Scott who performed most consistently throughout the day. Matthew managed to hang on to the runner-up spot with Luke coming in a creditable third. The highest break of the day was a magnificent 99 by Matt. 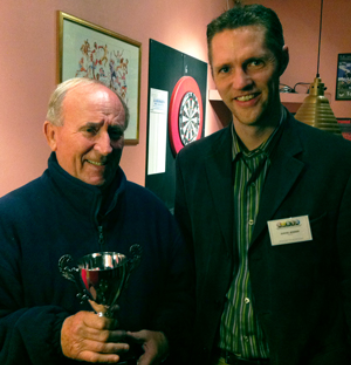 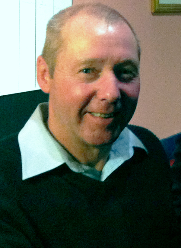 A slightly better turn out this year with 10 players taking part which was good. Once again Tony Molineaux showed his quality as he breezed through to the final without dropping a frame. Stephen Hills also played well to reach the final but it was Tony that came out on top for the second successive year taking home £70 for his efforts whilst Stephen took £30.
2009-10 SEASON